With squalling crowd amidst the serene feeling of being inside the temple of every cricket worshipper, Mexican wave taking whole stadium into a state of ataraxis and cricket aficionados waiting for the lad with red cherry in his hand to deliver the ball, the bowler starts running and crosses the man in authority, Umpire. With his arm coming down from a certain height, the ball comes down and kisses the 22-yard long track before whizzing past the gentleman standing against the tide with his almost a meter long arm in his hands, amidst an army of 11 players with cyclonically aggressive mindset. The man comes forward, puts his foot at right place in right direction and shoulder arms. The ball goes in the waiting gloves of the wicket-keeper, the crowd stands on its feet and appreciates the leave with a round of applause and that very moment cricket reaches its extreme level of sportsmanship which involves the participation of the crowd for whom the gentlemen’s game is played. And the gentleman whom we are talking about has promoted this certain phenomenon in a way that today if a player leaves a ball in a beautiful way, the men behind the microphones confer him with adjectives starting with the only name, Rahul Sharad Dravid, the gentleman who played the game with humbleness, respect and grace.
On Jan 11th, 2014 he lived through the 41st winter of his life and whole cricketing world wished its ultimate nobleman a very happy birthday. Rahul Dravid, who served the Indian Cricket team for 16 amazing years made his debut against England in 1996 when he 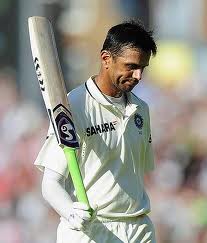 missed out upon a century on debut with a margin of just five runs. Before announcing his retirement from the International Cricket, he had 13288 test runs against his name with 10889 ODI runs too. A player with almost perfect technique and temperament, Rahul Dravid made no. three position his own by showcasing some solid class and continuity and for his solidarity in the middle against the rampaging opposition attacks creating havocs on the other end, he was bestowed with the title of ‘the wall’ of Indian cricket. The enigma of sneaking through the defence of Dravid made the opposition bowlers sweat in the middle with added amount of frustration which eventually helped India win countless number of matches.
His innings of 180 in the 371-run partnership in the infamous Eden test of 2001 against Australia would be remembered as one of the best innings played in the pressure situation against a giant Australian side after being asked to bat again once Australia enforced a follow-on.
Even before his retirement, in the penultimate series of his career, he came out as the highest scorer from the thwarted Indian side and hence justified the title of ‘the wall’ given to him by the Cricket fans.
Cricket may see better players but a player with as much respect for the game and with same humbleness away from the field may not be able to serve the game in near future again. The legacy that he has left will forever lift the reputation of the game with 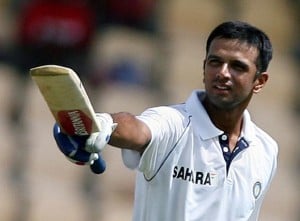 elegance. In a country where Sachin is worshipped as the God of cricket, this man has silently upheld the religious belief for cricket inside the worshippers of Indian Cricket.
Cricket world would miss the service of this forever young man with gifted hands in slips and with great athleticism.
Happy b’day Rahul Dravid.